About the LRAD technology

What is a Long Range Acoustic Device?

It is an acoustic hailing device which can broadcast intelligible messages, warnings and deterrent tones over much greater distances than normal loudspeakers.

What are the main uses of LRAD®?

LRAD® devices are highly effective in any situation which requires audible messages or deterrent tones to be broadcast clearly and intelligibly over great distances. They can be used manually by police in times of civil unrest or by emergency services personnel in the event of a natural disaster.

They can also be integrated with radar, cameras, lights and motion detectors to provide a comprehensive, remote-controlled security system to deter birds and wild-life from hazardous areas or to prevent intruders from gaining access to critical infrastructure. Keeping control, protecting assets and saving lives – that is what LRAD® is about.

Do the products work in all weather conditions?

The full range of LRAD® devices has been designed and built to comply with rigorous U.S. military standards governing shock, vibration, salt-fog, humidity and temperature. They are approved by both the U.S. Army and U.S. Navy and are in use at sea and in desert battlefield conditions.

Which product would be best for my needs?

The choice of LRAD® model depends mainly on your requirements for portability, manual or remote operation, loudness and the distance over which you need to communicate. Please contact us so we can discuss your needs and identify the correct solution for your business.

About the science of sound

How loud can it really get?

Sound is usually measured using the decibel (dB) scale. Normal conversation is 60dB whereas the continuous maximum noise exposure limit for an 8-hour day in the workplace is generally accepted to be 85dB. Like the Richter scale (which is used for describing the power of an earthquake), the decibel scale is logarithmic. Each additional 10 notches on the decibel scale represent a ten-fold increase in sound pressure level; to the human ear, this seems more like a doubling of the volume. This means that an extra 20 notches is 100 times the volume; an extra 30 notches is 1000 times the volume; and so on. With this in mind, consider the following familiar examples and imagine how loud it can really get: 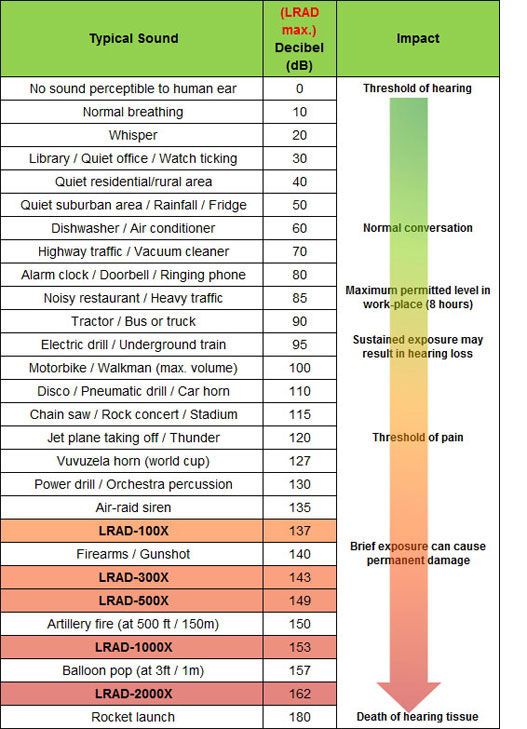 Can it harm buildings or infrastructure?

LRAD® technology does not harm buildings or infrastructure because it emits sound in the acoustic range where wavelengths are relatively short and therefore harmless to solid objects. The human ear is capable of hearing sounds from 20 to 20,000 Hertz (Hz) – this is known as the acoustic range. Frequencies below this are called infrasound and frequencies above this are referred to as ultrasound.

The higher the sound frequency, the shorter the wavelength, and vice versa. Thus, a frequency of 20 Hz, at the bottom end of human audibility, has a wavelength of 17 metres (56 feet), but the top end frequency of 20,000 Hz has a wavelength of just 17 mm (0.67 inches). When used to broadcast deterrent tones, the LRAD® emits sound in the 2 000 to 4 500 Hz range, well within the acoustic range. Contrasting this with the 4 186 Hz generated by the highest pitch key on a standard 88-key piano, the tones which LRAD® is capable of generating are extremely irritating (and potentially harmful at maximum volume) to humans but have no recorded effect on buildings or infrastructure.

How do operators protect themselves?

By design, the LRAD® transmits a focused, narrow beam (+/- 15°) of sound directly ahead of the device with up to 40 dB reduction in sound pressure levels to the sides and behind the device, as can be seen in the diagram below. 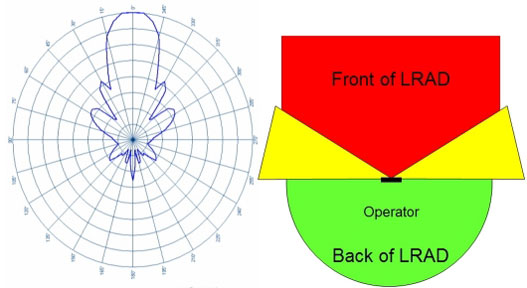 International health and safety standards allow exposure to 115 dB of noise for up to 15 minutes per day. The design of the LRAD® ensures that the operator standing behind the device is exposed to no more than 105 dB during normal operation (i.e. about ten times lower than the maximum permitted). However, operators should wear hearing protection (such as foam ear-plugs) so that they experience no discomfort due to the potential for reflected sound to increase the sound pressure level behind the device or in the event the system is operated for extended periods.

What does it do to birds or animals?

LRAD® systems actively help to preserve and protect birds and other wildlife from the hazards associated with such places as busy airports and runways, alternative energy installations and toxic waste dumps. At distances in excess of 2000 metres, LRAD clearly transmits intense, directional sounds in a variety of tones and predator calls to deter birds and waterfowl from flying through or landing in control zones. In March 2012, LRAD® and its avian radar partner, DeTect, Inc. were recognized by the Canadian Association of Petroleum Producers (CAPP) for the Horizon Oil Sands Wildlife Management System. It is a leading-edge bird deterrent program to avoid mortalities related to the Horizon External Tailings Facility (ETF). Employing technology originally developed for bird-aircraft strike prevention, radar-controlled LRAD®’s and lasers prevent birds from landing on tailings waste ponds.

The Merlin Detect and Deter system demonstrated 97.5 per cent effectiveness in responding to birds approaching the ETF and has proven effective with zero bird mortalities occurring in 2010 and 2011.

Is it a Sonic Weapon?

No, LRAD® is not a sonic weapon. It can be classified a non-lethal weapon in that hearing damage can occur dependent on three factors – namely exposure time, frequency and intensity of the sound/audio broadcast. LRAD® broadcast levels are intentionally kept below the threshold that could cause permanent hearing damage from instantaneous exposure.

When LRAD®’s deterrent tone is used at close range, most targets experience audible discomfort and then quickly cover their ears and move away. Just the act of covering the ears with hands reduces the sound pressure level by up to 25dB. Also, per the inverse distance law, every doubling of distance from a sound’s source decreases the sound pressure level by 50%. This law, combined with LRAD®’s directionality, allow targets to rapidly move away from LRAD®’s focused broadcasts even at higher volumes. 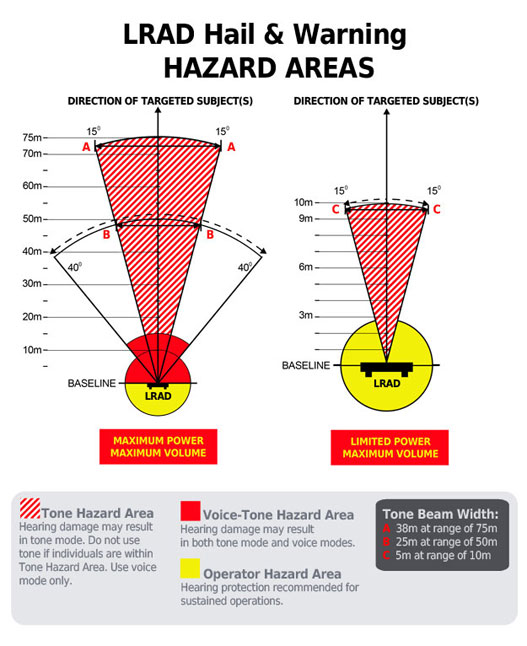 The above diagram shows the clear, concise safety instructions which have been developed by the world-renowned Applied Research Laboratory at the Pennsylvania State University. These instructions are printed prominently on the back of each LRAD® system to ensure operators have immediate access to operating guidelines.