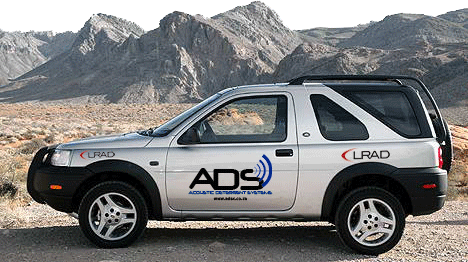 Acoustic Deterrent Systems is the official sub-Saharan Africa supplier of:-

As the global leader in long range acoustic hailing devices, LRAD® Corporation’s products are built to the highest standards for military hardware anywhere in the world today. All LRAD® products are easy to operate and are resistant to shock, vibration, salt-fog, humidity and extremes in temperature. They have been approved by both the U.S. Army and U.S. Navy and are in use at sea and in desert battlefield conditions.

Lasersec provides non-lethal lasers and systems to governments and commercial customers worldwide. The output power and efficiency of these lasers are unmatched in the industry. The Defense and Security business unit is responsible for the development and production of Lasersec’s non-lethal lasers and surveillance systems.  The products range extends from ultra-compact OEM devices for systems integration to complete surveillance units with gyro-stabilization, automatic target tracking, and the highest power commercially available non-lethal lasers.

All Maxa Beam Searchlights feature an unparalleled 12,000,000 Peak Beam CandlePower Output and a compact, rugged design. Handheld, weapon-mounted and computer-controlled searchlights. Peak Beam Systems, Inc. is a leader in the design and manufacture of high-intensity illumination devices for military and security applications.  Peak Beam’s flagship product, the Maxa Beam Searchlight, has been tested and fielded by U.S. military and federal agencies for over twenty-four years and continues to be the most powerful handheld searchlight available in the world.

Please contact us to request a demo or to discuss your requirements with one of our experts.

Keeping Control, Protecting Assets and Saving Lives – that is what ADS is about.